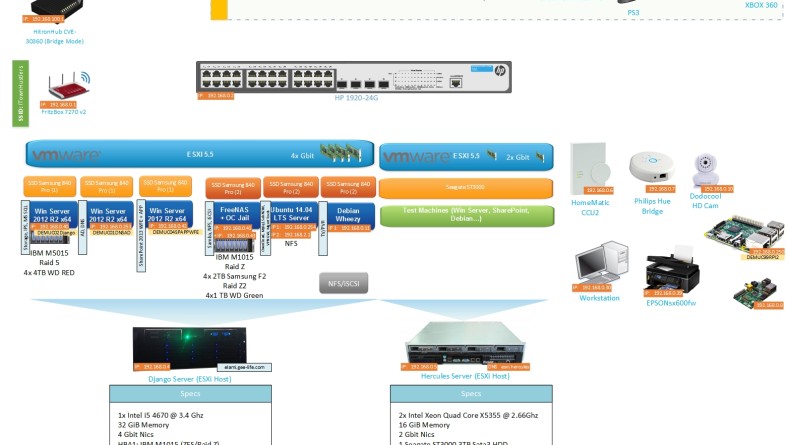 Meanwhile we moved to a new flat and added a lot of home automation and IoT stuff (hope to have enough time to post about it).

While connecting everything in the new flat and considering the power consumption charts in Symcon I found the 100W my current central server consumes too much for the few 24/7 functions it really does. It is an ESXi 5.5 with a couple of VMs.

See below illustration for a high level overview. It is not as nice as I would it like to be but may be enough to get an idea of my home infrastructure. 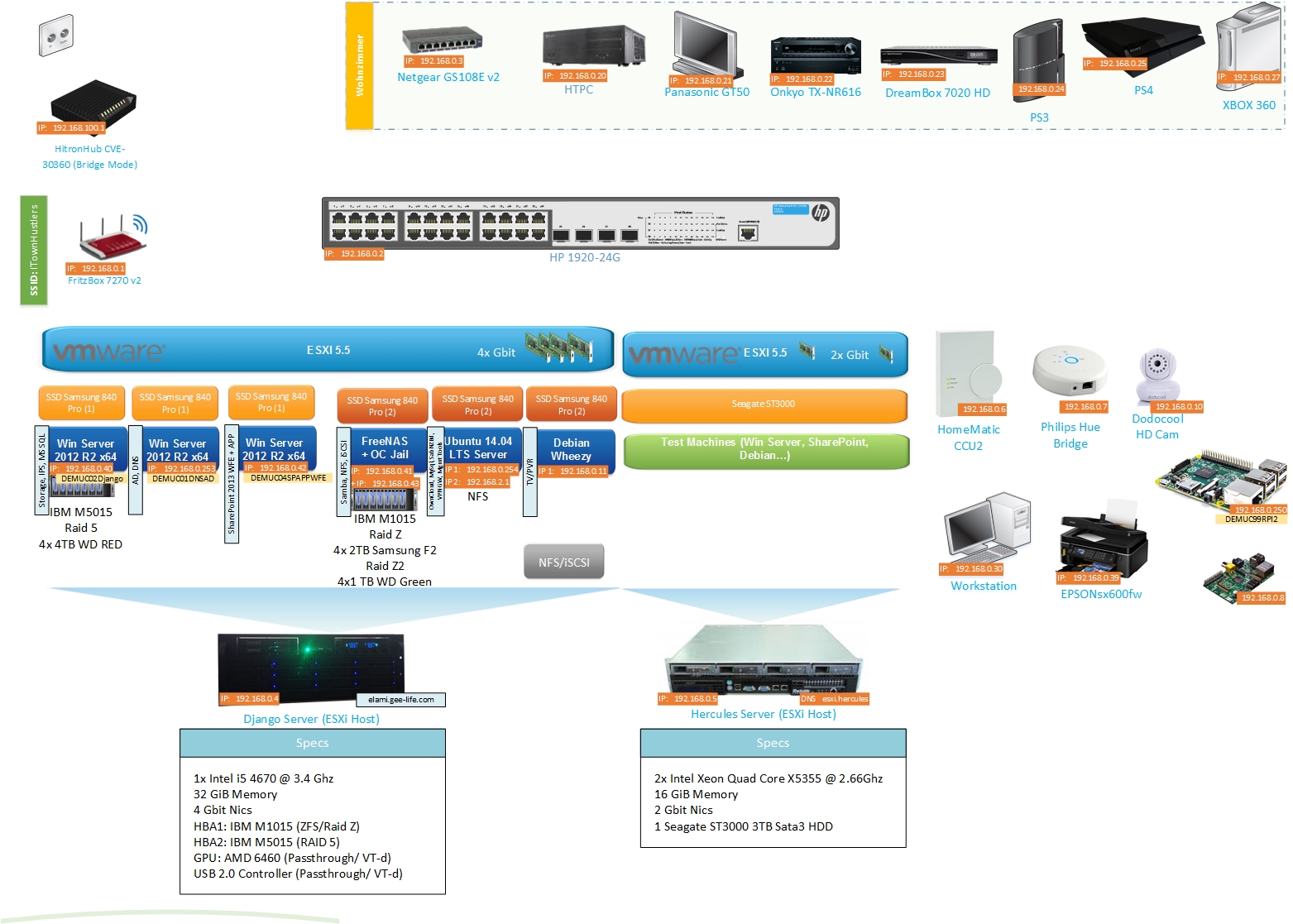 As I recently built a low energy server to tinker around with Sophos XG Home Edition, I gained some experience with low energy boards and SOCs. The new server had to take over the following responsibilities:

The Django Server (see picture above) should still serve as the real backup server but should only be booted in the night, grab the backups from the new server/workstations and go sleep again. For this project I used the old but still awesome case from the HTPC (see picture above) which is a SilverStone GD 08. I do not use the fans installed in it at all because I would like to have a complete noiseless setup. After the first tests the heat is not too bad.

Let’s come to the most important aspect: the mainboard and CPU. I tried to keep it a low budget project although I would have prefered some server hardware better:

Depending on where you get the items from you may pay between 300 -400€. If I wouldn’t have the psu yet, I would decide for a pciopsu though. The GPU is necessary for Kodi as otherwise the CPU would be utilized too much when playing 1080p.

Though the Symcon documentation clearly described how the backup should be created and restored, following these instructions did not work for me. I had to copy all files not only the mentioned from the Symcon folder. However this was smooth though and even the update to 4.0 was uncomplicated.

I found a very easy way to “migrate” (here more kind of a “move”) an Active Directory. I just added the new server as an additional domain controller and changed it to be the Primary Domain Controller (PDC) after the sync. Nothing special about the DNS, just copied some forwardings I needed for my SharePoint 2013 test environment, that’s it.

Yeah Kodi/XBMC is awesome if it is set up properly. I used to have the Ace theme enabled which I love but as it caused a lot of issues in the past and I never had it running smoothly, I decided to go for a different: ReFocus. Also Ace does not seem to have an active dev community unfortunately. However, I did the standard config like enabling Webinterface, Audio, Video, Skin, Shares, added data sources, installed SuperRepo, made it work with my iMON VFD (horrible!) and customized the skin with pictures either I or my girlfriend took. Yes, I used Photoshop whereas I do not consider myself an artist ,)

I am sure about the IIS but not about the backup solution. There are a lot out there and need to compare them first. Currently I am doing my backups manually and this should be automated. Any suggestions? 🙂