Smart Home: “Your Laundry is done!” with Homematic and Symcon

I mostly do my laundry twice. The reason is not a obsessive-compulsive disorder or because I love doing laundry…I just forget to get it out and want to have fresh clothes when I peg out washing .)

Therefore I seeked for a solution to be remembered, of course in an automated way with notifications about the start and stop of the washing machine (Push Message, Audio Play) as well as turning it off completely after it is done. After extending the radio range of the Homematic CCU2 (see here) the preconditions were ready and a connection between the Homematic device (HM-ES-PMSw1-Pl) in the basement and the CCU2 two levels above could be established. When buying the device, keep in mind to buy the one with a powermeter!

To identify phases in which the washing machine is operating and in which not, you should activate the logging of the “POWER” variable of the Powermeter instance and stard doing the laundry. This way you can gather information about the power consumption which you can use to identify the operation phases. 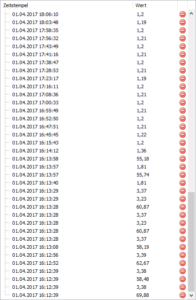 You can see the power drop to a “stable” 1,19 – 1,21 w which was the value when the machine was done. I did the same analysis  for the beginning of the process and I ended up with a threshold of 1,35 w. So if it is higher then 1,35 I could for sure determine the washing machine is washing 🙂

For a better visualization I added a variable “In_Operation”. This variable is set by a script which also notifies all smart home members of Symcon via push message, i.e. all mobile app users are notified. In addition a sound is played on all opened WebFronts saying “The laundry is done”. If it is done, the power adapter is turned off to save energy.

This is the script:

The script is triggered on limit exceed or on limit drop with the threshold of 1,36 and 1,35 respectively as shown below:

With this helper variable you can determine both if the adapter is on/off and if the machine is doing the laundry or not. 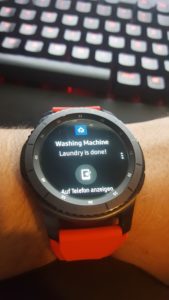